Skip to main content
To provide you with the best experience, Petania Hotel & Apartments uses its own and third-party cookies on its website for technical, analytical and marketing purposes. By continuing to browse our site, you are agreeing to our use of cookies. Please consult our Cookie Notice for more information. 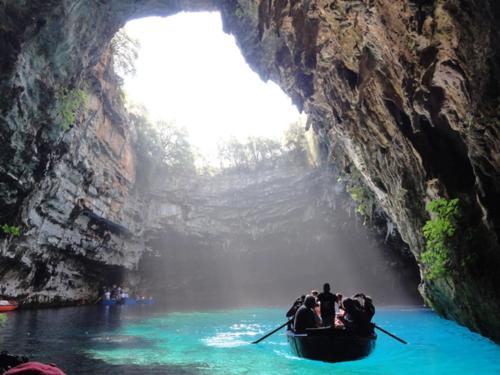 The Lake Cavern of Melissani is a unique geological phenomenon located 2 km northwest of Sami. The natural entrance of the cave is vertical (measuring 40x50 m) and was created by the collapse of a section of roof. Nowadays there is also an artificial entrance with stairs, which allows visitors to entry the lake cave. It was discovered by John Petrochilos in 1951.
The lake is 20m below the surface, is about 160m long and the depth of the water ranges from 10-40 m. Stalactites with an age of 20.000 years and odd shapes adorn most of the cave. It’s unthinkable to visit the island and not do the boats trip into this spectacular geological wonder.
The tour starts from the uncovered part of the cave where the light falls on the water and creates the most beautiful turquoise shades and continues in the part of the cave which is covered.
In the center of the lake is a small island on which artifacts were found; confirming the ritual function of the cave. In antiquity, prehistoric people worshiped the god Pana and the presence of female figures, known as nymphs. That is why the Lake Cave of Melissani is also called Cave of the Nymphs.
Opening hours
May - October
Monday - Sunday: 8.30 a.m. - 7.40 p.m. 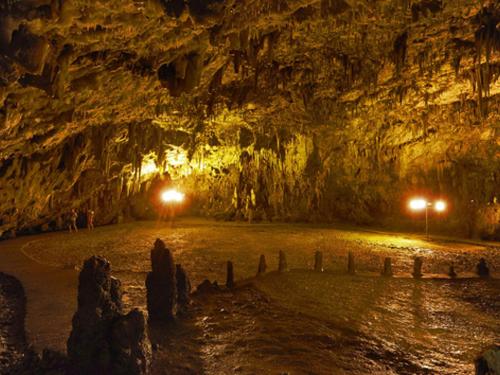 The Cave of Drogarati is a must see attraction of Kefalonia. Discovered nearly 300 years ago, when a part fell into itself because of the powerful earthquake and thus created the current entrance.
Originally, the cave was used by the community Chaliotata, under the supervision of speleologist Mrs. Anna Petrochilou. Since 1963 the cave is open to the public all year round.
The Cave of Drogarati is located 3km from Sami at an altitude of 120 meters. The depth reaches 95m and the temperature is 18°C (64.4°F). It is considered one of the best caves in Greece and it is the only one with such a large room (Dimensions of 65m x 45m and 20m height) and most suitable for cave therapy.
The Cave of Drogarati is alive since its creation is continuing since water drops are falling everywhere from the stalagmites. Don't disturb those drops from falling, since this has a major impact on the creation of the cave, which dates back over 100 million years! Imagine that a stalactite grows approximately one centimeter every hundred years.
The big hall, decorated with stalactites and stalagmites, has excellent acoustics and is designed for concerts with a special platform. The two most important and largest caves are the Cave Agalaki and the Cave Zervati.
To visit the cave, one will have to climb specially designed steps, which, because of increased humidity are extremely dangerous and therefore requires great care.
Opening hours
Monday - Sunday, 8.00 a.m. - 8.00 p.m. 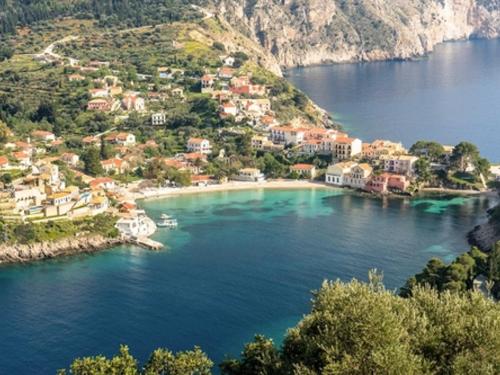 One of the two (2) castles which should not be missed out during your visit in Kefalonia is the Castle of Assos.
This castle is a genuine example of the Venetian fortification art. The Venetians wanted to establish a strong castle and state with a permanent population.
It is built on the peninsula of Assos, a highly strategic position. Nowadays you can enjoy the view and admire what is left of its former glory.
One of the monuments on this castle is the residence of the Venetian ruler (1593), the barracks and the church of Saint Marco. The big vault entrance of the castle still stands impressive and is preserved in good condition. 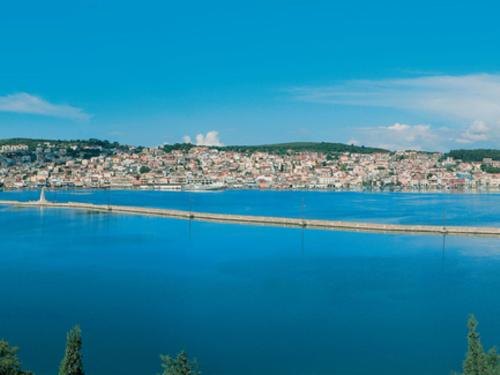 The Swiss Charles-Philip De Bosset is the manufacturer of this project, which was the breath for residents of Argostoli and the villages of Kefalonia, the bridge De Bosset. The construction in 1813 of delighted residents of the island was for them a great advantage as regards their travel and avoid the ferrets a malaria outbreak and death.
Initially it was a wooden structure which after the leveling of the Metela hill was constructed out of stone. In the middle of the bridge you will find a monument dedicated to manufacturers, who have given this island such a large infrastructure project. Also, the road leading to the bridge is named after Charles-Philip De Bosset in honor of the man who gave new meaning to daily life.
Today it is necessary to restore the bridge, which has suffered damage and has not been restored because it is frequented by pedestrians and before 2005, even from vehicles. 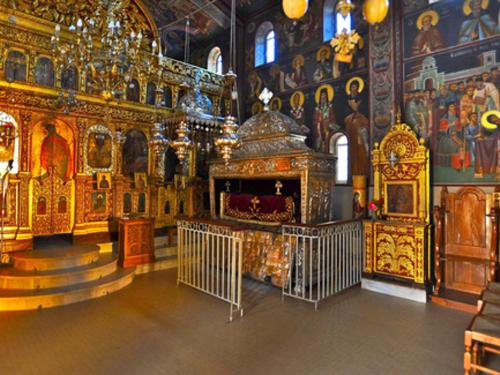 The Monastery of Agios (St.) Gerasimos is the most holy Church of the island. It is build located in the village Omala, at the top of the green valley with 40 wells, near the villages Fragata and Balsamata.
Agios Gerasimos is the patron saint of Kefalonia, and its relic is kept in the monastery, in a silver urn.
Agios Gerasimos was a monk from Trikala of Corinth and founded the monastery in the 16th century, renovating an older one, which was dedicated to the Virgin Mary. Agios Gerasimos died in 1597 and sanctified in 1622. He became famous for his miraculous abilities on people suffering from mental illness. The monastery is impressive, with a chapel and a new church with very rich decoration.
Below the Monastery (in early years the Monastery was in front) is a cave, built by Agios Gerasimos, where he held his daily prayeres. Pilgrims from all over Greece come to pray and honor the saint here.
The people of Kefalonia honor the death of Saint Gerasimos the monastery on the 16th August and the restitution of his holy relic on October 20th. On those days, a procession of the saint is taking place. The coffin is moved under the shadow of a plane tree, which was planted by Agios Gerasimos himself. The ceremony is followed by a big festival with music, dancing, food and wine.
Opening hours:
Monday - Sunday, 7am - 13pm and 3pm - 9pm 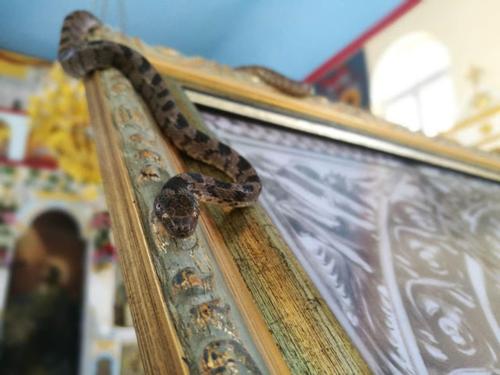 In the village Markopoulos of Kefalonia, in a hillside full of trees, is the Church of the Assumption. In this Church are presented every year from August 6 to 15, the small snakes of Virgin Mary, hanging from the church icons. The image of the Virgin Mary, according to tradition, was found in a tree, where unknown how, caught fire without damaging the image. It belongs to the Holy Metropolis of Kefalonia.